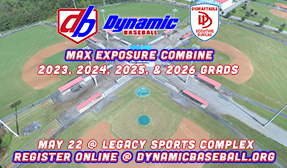 General Information:
Updated standings and scores will be posted on dynamicbaseball.org

If you drop out due to COVID after the schedule  is released there will be no refund or credit given.

14U teams will be required to play into 15U/14U Division

weather delays and other important tournament information will also be posted on the tournament page.
Please arrive at least one hour before scheduled game time, games will start early when possible

Flip for home team during pool play. Higher seed is home team in playoffs. There will be tournament passes sold. Every team will go thru venues that sell tournament passes. It may be your 1st or last game. Please check your event page at Dynamic Baseball for details. We will not tolerate harassment of our staff. Cash only.
No player can play for more than one team within the same age division. If this happens, team will forfeit all games.

Rosters:
Team Rosters must be submitted into PlayBook 365 prior to the tournament.

Baseballs:
Each Team will provide NFHS quality baseball evenly throughout each game. Until Further notice Baseball will come directly from the dugout. UMPIRES WILL NOT HOLD BASEBALLS.

Suspended games – We will attempt to complete all suspended games. In the event the game can’t be continued, Dynamic Baseball can declare a winner even if the game has not gone 4.5 or 5 innings. Decisions will be made fairly based on the best interest of the tournament and its participating teams.

Seeding is based solely on overall record, head to head (if applicable), runs allowed and runs scored. Winning your pool does not give any sort of seeding priority. A second-place team from a pool of six can be seeded higher than a pool winner from a pool of five or four.

Depending on the format – a wildcard team could advance to the playoffs. Wildcard team(s) could come from any pool. Will be chosen by best overall record, head to head, runs allowed and runs scored.